2013 has been a busy year in the NBA and the Houston Rockets have been making the grade when it comes to signing free agents during this season.

With the signing of center Dwight Howard, which was four years in the making, the Houston Rockets have earned an A+ for the four year, 88 million dollar contract signed by Howard. Wearing number 12, Howard is a powerhouse, shooting 58.2% from the field and averaging 17.9 points per game. Add in 13.2 rebounds and 1.8 blocks per game and Dwight Howard is the number one free agent signing for the NBA in 2013. 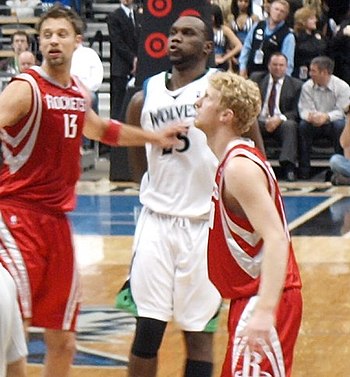 The L.A. Clippers also made a smart move when they re-signed Chris Paul to a 5 year, 107 million dollar contract. As point guard for the Clippers, Paul has 8 years of playing experience that he brings to the table. Paul has averaged 19.7 points per game in the regular season, 2.5 steals and makes over 33% of the three point shots he attempts.

Kevin Martin, signed by the Timberwolves has also proven his worth to the team in Minnesota. Although initially this trade concerned analysts because it bumped sharpshooter Andre Kirilenko to another team, Martin has exploded on offense, shooting 40.1% from the 3 point range. Averaging 19.9 points per game and almost flawless from the foul line, Martin deserves the four year, $28 million dollar contract he just signed.

In other basketball news and odds and ends, the Charlotte Bobcats are in a position this year to see some post season play mainly in part because of signing free agent Al Jefferson.

Jefferson, at 6′ 10″ and 289 pounds, Jefferson dominates the center of the paint. He has averaged 17 points per game, 1.4 blocks and shoots 45% from the field. He has signed a three year contract with the Bobcats as part of their re-building and it is worth $41 million.

Monta Ellis is also stepping up for the Dallas Mavericks. Ellis will play the next two years for the Mavericks with the third year contract he signed including a player option where he can go back to being a free agent after the first two years or stay with the Mavericks for a thrid season. The deal is worth $25 million dollars to Ellis. He is averaging 20.3 points per game this season, almost a point higher than his career average.

Playing at guard, the 6’3″ Ellis shoots 45% from the field and brings 8 years of experience to the court. Since Ellis didn’t get the deal he wanted out of free agency, he might seek a better deal once the next two seasons are up. Ranked at number 10, Ellis is proving that he can bring the Mavericks to the playoffs this season.

The Houston Rockets, ranked number six, probably made the best deal in 2013 with the signing of Howard. They aren’t at the top, yet, but he is playing well and keeping the Rockets as contenders this season.