If there is a form of fighting which can most closely replicate a real life free style physical combat it is Mixed Martial Arts. Its real life touch and minimal rules could explain its rapidly growing popularity earlier in US, Canada, Brazil, Japan and now world over.

Mixed martial art works on the synergy of striking, grappling and ground fighting. Striking traces its root in the fighting skills like boxing, karate and kick boxing; grappling is the essence of wrestling while ground fighting is an important part of Brazilian Jiu Jitsu. 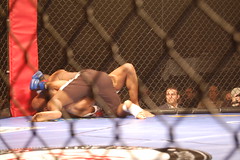 Since it is based on the best possible combination of moves from different genres of fighting skills, it takes training and commitment to be a mixed martial arts fighter. It takes practical strength and stamina and full body workouts. You should be brisk as a bee and should have a negligible reaction time. Like any other competition mental toughness plays an important role and it being a combat sport, resilience becomes even more significant.

The popularity of Ultimate Fighting championship and other MMA based combat sports have led to a surge in number of youths interested to learn mixed martial arts. One can join the best academies such as Queens MMA academy for the complete success in MMA training.

Physical preparedness is a key to success in any combat sport and it will come from following strict exercise routines which includes both cardio and weights. It has been seen that med balls are great for abdominal muscle toughness and to build core strength. When the fight carries on for multiple rounds mental preparedness plays an important role.

The functional knowledge of different genres of fighting skills like Muay Thai, karate, Boxing, Wrestling and, Brazilian Jujitsu makes mixed martial arts, one of the most difficult sports. The fighter equipped with this knowledge knows when and how to resist, dodge or counter an attack by the opponent. He knows how to find an apt moment to attack and how to maintain safe distance when required

A good strategy will be carved out around your opponent’s weaknesses and strengths and increases your confidence. The MMA fighter with a strategy sets the rhythm of the fight in his favor. However if the strategy is not working he should be flexible enough to adapt to the situation.

The sport can cause serious injuries if you are not well equipped with your gear.

Stores online such as ultimate MMA shop provides you best Protective gear, Mouth Guard, MMA/Grappling gloves (preferably thumbless for easy grappling), Boxing Gloves, Shin Pads, Headgear (Close-fitting), etc. These are some important gears for an MMA fighter which you should not ignore.