A packed weekend of fixtures in Serie A saw the Italian team Juventus strengthen their position as league leaders. Well over the halfway stage in the season, the Turin club is nine points clear of its closest rivals, Roma which has 54 points against Juventus’s 63. Roma at least managed to keep pace with the lead, matching Juventus’s result. 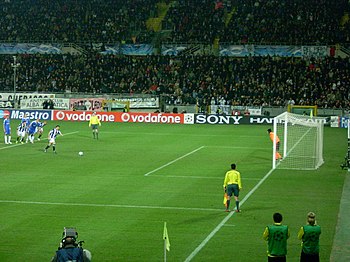 In defeating Chievo 3-1, Juventus maintained its enviable 100% home record this season. In the league, Juventus has triumphed in all 12 home games so far, form which has seen the team amass such a huge lead at the top of the table.

First half goals from Asamoah and Marchisio were replied to by an own goal credited to Caceres, before Llorente sealed the victory against the second-from-bottom placed club just before the hour mark.

At the Olympic Stadium, Roma entertained Sampdoria, needing a win to keep pace with the leaders. Mid-tabled Sampdoria managed to keep Roma out for most of the first half, until Mattia Destro reacted to a corner kick being taken a minute before the break to break the deadlock.

The opening period of the second half saw Roma far more productive in front of goal, with two goals coming in the first 15 minutes. Pjanic made it two goals to nil with an exquisite free kick from thirty yards out on 54 minutes, and Destro doubled his tally for the night benefiting from a flick from Gervinho.

Sampdoria finished the game with ten men, following Gastaldello’s sending off for a second bookable offence. The victory helped to maintain the faint title hopes held by Roma fans, but it is very much Juventus’s title to lose.

The battle for Champions League places intensified as Inter Milan travelled to Fiorentina, with both clubs breathing down the neck of third placed Napoli, which currently occupies the final qualification place. With both clubs hopeful of being in Europe’s premier club competition next season, this was the proverbial six pointer. Inter’s Palacio opened the scoring midway through the first half, although the lead was fairly short lived.

A mistake from Internazionale’s keeper Handanovic let Cuadrado find the back of the net to equalise. Icardi came off the bench to seal the victory for Inter with a volley. While the win helped the club to gain ground over Fiorentina, Inter remains in fifth position in the league.