Greyhounds racing are a sporting event in which select greyhound dogs sprint after a lure on a race track till they reach the finish line. The bait or lure is a mechanical device, which moves around the race track at a significant distance from the greyhounds and looks like a rabbit or a hare.

A dog arriving first at the finish line is declared as the winner. In most countries, greyhound racing is merely an amateur event conducted for pleasure. But, In the U.S.A, UK, or Australia, it is linked with gambling, similar to horse racing. 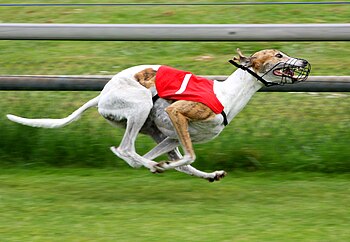 Procedure and popularity of the sport

The traps with automatic gates open with a signal or queue. After the completion of a race, greyhounds are given water and allowed to walk in an open area.

The winner is called upon to the winner’s circle. For every greyhound racing event, you will find several spectators and gamblers appearing to experience the thrill of the Live Greyhounds racing sport.

The energy and pace of the sporting event is out of the world and people gamble thousands of dollars just to see their betted dog win.

The start of modern greyhound racing dates back to the early 1900s, as Patrick Owen initiated the idea of greyhound racing. The first circular racing track was made in California in 1919 and the sport popularized soon after.

Today, the procedure of identification and registration of greyhounds is done by the National Greyhound Association, which is a non-profit organization functioning in North America. Only the registered owners are able to enter in a limited agreement with registered kennels.

The kennels then make contract with different tracks for events. The sport is recognized by the World Greyhound Racing Federation (WGRF) founded in 1969. Then on-regulatory organization is committed in providing information and support for the sports nationally and internationally.