It’s rare that the ESPN College Gameday crew pays a visit to Stillwater, Oklahoma, but that is the case this year, as Baylor pays a visit to Oklahoma State in what could be the game of the year in the Big 12. The No. 4 Bears are still very much in the hunt for BCS tickets, while the No. 10 Cowboys hope to knock Baylor out of the top spot in the conference. 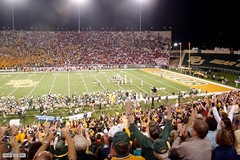 Baylor took care of business last week against Texas Tech in Arlington, pulling away for a 63-34 victory. Despite falling behind 20-7 late in the first quarter against the Red Raiders, the Bears bounced back to outscore Texas Tech 56-14 the rest of the way. Baylor head coach Art Briles has his team playing with incredible confidence right now, and should either Alabama or Florida State slip up down the stretch, the Bears could very well find themselves right in the mix for BCS tickets.

As good as Baylor has been, Mike Gundy and Oklahoma State represent the Bears’ biggest challenge of the entire season. The 9-1 Cowboys have won six straight since a puzzling loss to West Virginia in late September, and control their own destiny in the Big 12 race. With QB J.W. Walsh struggling against TCU in mid-October, Gundy made the switch to senior signal caller Clint Chelf, who has since stabilized the Cowboys’ offensive attack. OSU has a fairly balanced offense, averaging over 250 yards through the air and over 170 yards on the ground. Led by all-conference LB Bryce Hager, the Bears have been surprisingly effective on the defensive side of the ball, limiting opponents to just 17.4 points per game.

The Bears also have an interesting challenge in front of them in Oklahoma State’s defense. The Cowboys have forced 26 turnovers this season, including six interceptions by potential All-America CB Justin Gilbert. However, Oklahoma State has not faced an offense quite like Baylor’s, which still ranks first in the country by a wide margin. QB Bryce Petty has quickly found himself among the favorites for the Heisman Trophy, with five total touchdowns this past Saturday to give him 34 touchdowns on the season.

Baylor cannot take this game lightly, as Oklahoma State is a quality opponent that will be playing in front of a raucous home crowd. However, if the Bears are able to win the shootout with the Bears, they will put themselves in great position to grab BCS tickets should another contender falter down the stretch.

About the author – Brent Larsen is a lifetime sports fan. He follows the NFL, NBA, MLB and NHL, as well as college football, golf, tennis, extreme sports and everything else in the sports realm. Brent writes for several sports blogs during his free time.